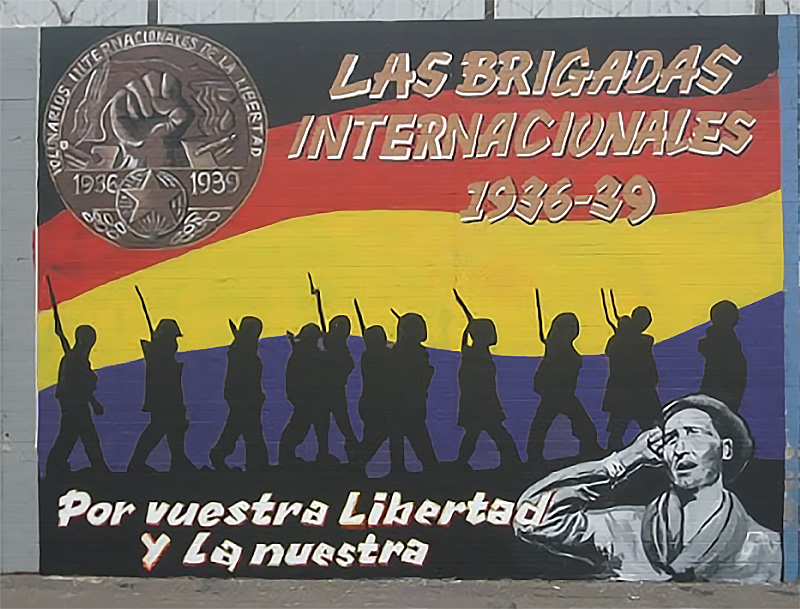 Internationalism and the Spanish civil war; of course they are connected. The two and a half years, as people out of fifty countries of all continents risked their lives to help their sisters and brothers of a foreign country with a foreign language – which was unsurpassed in world’s history. The last of these volunteers leave us, the memory of these braves must not disappear.

Do all traditions have something to do with us today? We think yes! Thousand of young Germans block the fascist movement and call „no pasarán!“. The same words can be read on the banners of Athen and the Curds, who fight against the bombing of their villages. How many of them know about Madrid, where this words originate? This knowledge could be useful for them.

More important: Similar mistakes, perhaps the same vicious intentions, who made the governments in London, Paris and Washington to let the democratic Spain die, and let them to support the troops of Franco, Mussolini and Hitler, are still present – and again there is a call to war many times more dangerous than in 1939. From the weakness, the mistakes and the cowardice of the past must be learned for today – as of the courage of the 40.000!

Many of this can be read in the book of the fighters and friends of the Spanish Republic 1936 – 1939 – tragedy, information and also humor. Victor Grossmann, the author of this book, will talk about this on October the 20th.